In an effort to move forward with the concept of regional sourcebooks for Tsolyanu and Tekumel in general, I have created a poll on the Tekumel Yahoogroup. The idea is to attempt to identify areas of interest and establish a starting point.

The poll is located here:

The first step as I see it is to identify areas of interest. The next step will be select a region based on the interest indicated by the poll. The third step will be to form a working group to collate the available data and move forward towards a draft document. This would include cartography and art. The fourth step would be to compile the information into the document and move forward with publication.

If you think this is a worthy effort then please indicate your interest by voting in the poll.
Posted by phf at 11:09 2 comments:

Made a bit of progress today on various stuff...Halberd designs for the Qól (thanks Jeff!) and deciding how to proceed with the mapping now Mark has left the project. Jesse is going to try a hand at it - the thing is what to do with the map Mark already made. I don't think I want to mix styles...

Anyway, I digress - the main point of this post is that I put paint on figures for the second day in a row! Woo Hoo! This is almost unprecedented as I can go years without painting a single figure! Generally what happens is I have to paint 800 figures for some game and it just burns me out.

Yesterday I cleaned up and primed the figures - today I started on the flesh. I'm using one of Foundry's Flesh Triads: #119 South American. Only I may just use the two darker shades as I tried them when I first received them in the spring and I thought the highlight shade was too - umm - "waxy." It spoiled the look I thought.

#119A-Shade with #119B over top looks quite nice, however. Man these guys are ripped - straight from the set of 300, some of them! I suppose the life of a Háida Pakálan ruffian is a bit of work. And so it should be, I wouldn't want to think their Tsolyáni and Salarvyáni victims were pushovers!

I also did a couple of Fortress Figures' Amazon hoplites who I converted a while ago by chopping off the helmets and giving them green stuff hair. These figures are by Bobby Jackson and are sporting a LOT of flesh - all of it, to be exact! ;-)

How better to try out flesh paint? :-)

Not sure if they are still available. The conversion was a real bugger as the metal wasn't very easy to cut through. I've still got about 8 more i was going to convert, but now that John is almost done our Light Infantry blanks that problem is solved!

(Obviously, I should have commissioned them in the first place!)
Posted by phf at 16:54 No comments:

Today I Converted a Llama... 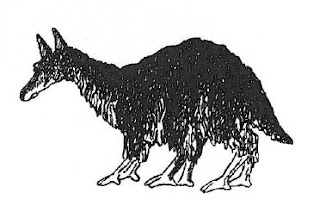 MegaMiniatures has a blister of Ilamas for about $8-10: 1 x adult male, 2 x females and 2 x calves. I think the basic size and shape is about right though the picture in the Tekumel Bestiary (see above) gives them more of a hump and the neck is shown more horizontal (mind you it could be feeding.)

The main difficulty is that the Hma have six-legs so my conversion involves cutting a groove over the middle of the body in order to wrap a wire around so I can use some green or brown stuff to make the extra pair of legs. I might build up the back a bit and maybe lengthen the male's snout a little, but otherwise I think that should be that.

I also worked on making some funky polearms for my new Háida Pakála pirate rabble and started to paint the archers, as they don't need any conversion work. I really like the poses - especially the one starting to draw the bow back. The archers are probably my favourites of the Wako Pirates from Cavalcade Wargames.

And then we had a terrific Thunder Storm - Hail, the Whole Bit - and the power went down. Sort of: we had power but some stuff didn't work any more - like all the kitchen appliances, freezers, TV, DVD player, and computers. I thought we had been hit with a spike and that maybe everything was fried. Then the power went off totally. It's back up now, and as you can see nothing was fried - it was just a period of low-voltage for about 20 minutes before the power went down.
Posted by phf at 21:23 1 comment:

Despite it being illegal to use them in the field, the Temple of Sárku, Lord of Worms, maintains large contingents of undead soldiers. These the Imperium tolerates as long as they are restricted to the confines of Sárku's own temples or the city of Sárku itself.

What happens in the Underworld (or Tsuru’úm) is another thing altogether...

There are loads of undead figures currently available - zombies, skeletons, ghouls and the like. Practically every fantasy manufacturer makes undead of some sort. Some are nicer figures than others, of course. Some are not that well sculpted, while others have a distinctive medieval flavour or are too comic for our needs.

I have found a few that, IMO, would be suitable for Tékumel:

Viking Forge have a single pose from the old Asgard range which is quite nice. Even better, however, are the new Revenant Undead figures just released in hard plastic by Mantic Games. I haven't been too keen on the rest of the range (skinny elves) but this latest release is quite nice.

Now be aware that they have two types of skeleton foot - the ordinary skeletons and the Revenants. The difference being that the latter have more armour and fancier armour at that. This is what makes them so suitable. The armour is very ornate looking and there are lots of plumes on the helmets. There are even some exotic looking swords and axes. All-in-all there is quite a bit to give them a Tékumel "feel"!

Size-wise they are slightly tall, but not overly so. They are not bulky either so this size difference isn't so noticeable.

Overall, I like 'em and will be filling the ranks of my Sárku legions with them. Whew - another unit type I don't have to pay to have sculpted!
Posted by phf at 09:07 No comments: 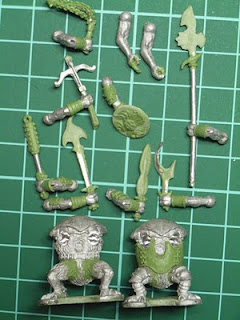 Alan sent me a scan of the completed Ahoggyá - armoured and unarmoured with multiple arm variants. I think they look very spiffy! :-)

I especially like that sword on the left, but the shield also turned out really nicely as well.

The intent is to offer them with a random assortment of arms - ideally, all different, of course.
Posted by phf at 19:08 4 comments:

Sure enough, these guys arrived today. Yay! I always like getting new unpainted lead. The only thing better is getting [well-] painted lead, as the unpainted stuff often stays that way for a looonng time. ;-)

I have torn off the wrapping and done a quick comparison to a Legionnaire of Serqu archer. I have to say I am impressed - these guys match up really well. They are slightly more muscular but not so much as to cause "issues". 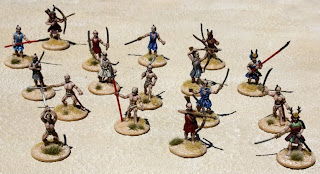 With the order of battle for Tsolyánu alone totaling some 90 legions, it is readily apparent that making miniature figures to cover all the possible Tékumel subjects is an impossible task. One must accept the use of proxies at some point or other, to represent the more obscure troop types.

Personally, I think they might make good proxies for the ruffians found in the service of the lords of Háida Pakála - or possibly Tsoléi. I've ordered the "collection" to see how they look up close.

They won't be perfect, of course, as the Source Book puts the males in "loose, knee-length trousers" and doesn't mention them using bows - seemingly preferring slings. I'm willing to accept these differences, however, as the Source Book has a number of contradictions in it's pages. And - in the end - it is My Tékumel I am gaming in, after all - YMMV.*

I am considering taking greenstuff (or more likely, brownstuff) to the sword blades so they are not so katana-like. Ditto for the yari. I think the bows look fine, but will probably scrounge up some slingers from somewhere.

I haven't seen them in the flesh, of course, but I am hoping they will show up this week. The only thing that is bothering me - just a little - is that there are several guys with only one eye; and it is always the left eye they are missing! Why is that? Punishment for thievery, perhaps?

Anyway, I'm looking forward to these figures. I recommend you guys check them out also. And it seems they are running a sale until July 15th. I'll be sure to post a report when I have the figures, in case anyone is wondering about sizes.

Where does the time go...

So - another month gone by. Where did the time go? Was anything accomplished? Why no updates?

Things have been happening, though at seemingly glacial speed:

1) The Hlutrgu are finished and have been shipped to the caster. Unfortunately, these will not be molded until later in the month - not with this weekend being a major US holiday and next weekend being Historicon (unless I am mistaken.) First masters have to be molded and samples sent for inspection - then the production molds will be made. I am hoping for a September release date - based on my experience on how things get delayed in the miniatures business.

2) John is 99% done the blanks - he assures me - so I hope to soon get an email saying they are ready to be mailed to me and then on to the caster. I have been thinking up stuff for him to work on in the time between finishing and getting the castings back. Hopefully things will progress quickly on to some figures once the blanks are cast up and delivered.

3) Art work is progressing slowly. I have an artist doing concept sketches for armour on future releases so as to avoid the cock-ups that have plagued the Dharu and Vanu figures! Unfortunately, he has work commitments that mean he will be leaving after his current slate of work is done.

4) A Band of Joyous Heroes and Kerdu - progress is slow and playtesting ongoing. Those interested in helping should email me.

5) The Ahoggya "kit" is finished being sculpted. Pictures coming tomorrow - with luck.

6) Another sculptor is starting shortly. I'm just working out the details on what he is to do. I am preparing a big "push" to get the Tsolyani battalia filled out a bit.

7) Resin beasties in the form of Chlen and Serudla are being sculpted, as well as smaller Tekumel creatures such as the Biridlu.

Meanwhile, other people have been doing more productive stuff. Like painting their legions!

I wish my figures forces were as complete!