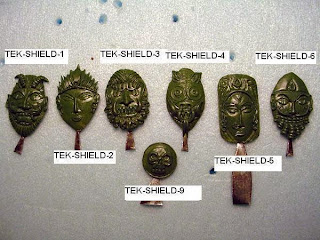 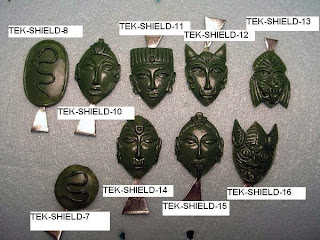 Just had word that 6000 generic fantasy and Shén variant shields shipped out today. :-) 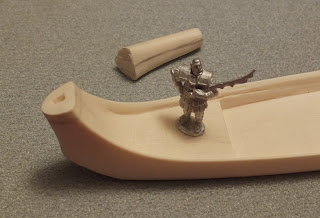 Close-up of the prow 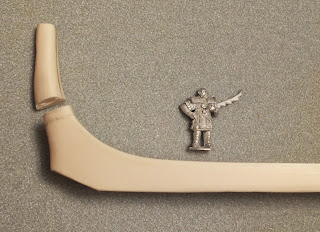 Side view, to show scale

As some of you may already know, I have a side range called the "Garden of Kama", which is a sort of fantasy India and SE Asia setting. The galley shown above was originally commissioned as part of that range along with a slightly smaller war canoe. Both are historical Khmer vessels based upon the wall carvings at Angkor Wat and other Khmer palaces. That project is moving ahead slowly with some of the basic Khmer infantry already done and others in progress.

The boats had progressed as far as the basic forms but then stalled. The historical vessels had highly decorated prows and sterns: typically they had ornate Naga heads at the prow and, predictably,  tails at the stern. The lower part of the bows had Makara heads, complete with protruding tusks which may have served as rams. The intent is to get the boats made so that they have modular prows, sterns and bodies allowing for as much variation as possible.

The galleys are 12" long and have 20 oarsmen, 10 men down each side. There is a seating platform piece which is not shown in the photo. There will be a single steersman with a steering oar over the starboard side. And then there will be a fighting crew. The oarsmen are protected by wicker screens.

The war canoes are smaller, only 8" long, and have about 16 paddlers, or thereabouts, plus a steersman same as the galley.

In the pictures above one of our newest sculptors has cut the prow off one of the basic galleys. A decorative collar will be added to the hull just below the join. A Naga head prow will be sculpted to slot into place. The Baron - in the form of one of his master figures - has graciously deigned to stand in to show the scale. Afterwards he will be heading off to get a nice new mold. :-)

I'm showing you this here because I am going to get a Tsolyáni version of the prow done as well so that the galley can serve as a river and coastal patrol vessel. :-)
Posted by phf at 21:39 8 comments:

The Legion of the Lord of Red Devastation 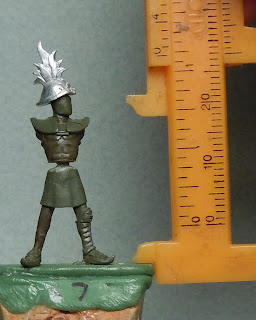 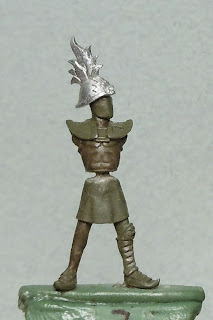 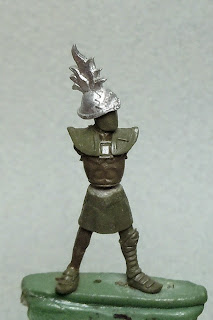 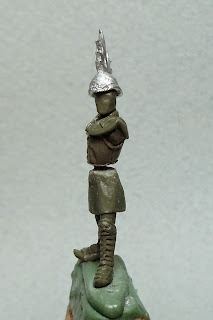 The latest from John Winter. :-)

After many delays due to illness and other obligations it seems we are back on track. Yay! :-)
Posted by phf at 09:00 No comments: