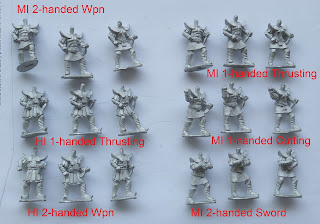 Here are some of the Yán Koryáni dollies that were prepared to facilitate the production of all the figure variants.

There are two male poses, differentiated primarily by the position of the legs, and one female pose (on the right) for each category.

The so-called "Medium" armour is a chlen-hide cuirass, while scale is used to denote the "Heavy" armour. The way the Professor described the armours it is quite possible to have lighter or heavier versions of either type. He told me that the Yán Koryáni formations should be irregular; armour might be new or handed down by generations of warriors. It was to try to achieve this look - in an affordable manner - that we chose to use the helmet variants that we have. So, one could mix-and-match scale and cuirass armoured infantry within the same unit if one wanted even more variety. It might also be reflected in the way the unit is painted.

You will note that the above figures are lacking heads. Alan added the heads afterwards, using the three variants I think I mentioned in my last post. Looking at these dollies today I wondered what other purposes they could be put to.

My goal for 2018 is to get all our Yán Koryáni back into production by the end of the year. And also those that have never been moulded or cast before. Basically all those YK listings on the Tekumel Club blog, currently in red under the "Palace of Ever-Glorious War" page,  would be shown in black and available for purchase.

This will mean that there is a severe imbalance against the Tsolyáni. The Legion of the Lord of the Red Devastation (aka the Red D's) is still only partially ready for production. What else could be added - and in an affordable way? Can any of these dollies be utilized by the Tsolyáni? What do you guys think?
Posted by phf at 14:29 3 comments:

The mold for the plumes was shown in my last post. It has 27 helmet plumes and two each of the other types. So, assuming the mold was spun 26 times to get the 52 double helmet plumes, that means about half the large banner plumes had problems, and about 30 helmet plumes, but only 2 medium banner plumes.

Working it out in my head, this gives me enough for 24 Warbands (10 troopers plus command). This because I only have 24 large banner plumes and I will likely want one per banner (plus two medium plumes).

How many helmet plumes are required for those 24 Warbands is not as straight forward. The command figures are generic for many of the Yan Koryani gureks, all of those that wear the khil, in fact. One third of the khil-wearing figures have a crested version without a plume. For each pose type there are 9 figures, 6 male and 3 female. Of these, 1/3 have the tall plumed helmet, 1/3 have the shorter plumed helmet with the "beak", and the rest have crests. The 10 troopers in the warband or horde will be more or less randomly picked, 6 male and 4 female - though if a customer requests a specific mix I am happy to oblige. Some gureks might use more than one pose type. For example, spearmen might use the overhand and underarm poses, meaning there are 12 male figures to choose from to put in the packs, and 6 female.

There is additional variation in that the male figures have varying facial hair.

If the 24 Warbands assumed above use all plumed helmets (240 plumes), then that leaves me with 432 plumes, or a further 43 hordes - again, all wearing plumed helmets. So I guess what I have is really enough for about 60 hordes. The Warbands are constrained by the number of banner plumes.

That seems like a reasonable number, except that one must remember these plumes are used for many different units: Valiant of Ke'er, Turquoise Eye, Tleku Miriya I & II, Defense Against Evil, Rulla Gurek, some elements of Makhis Gurek, some of Silver Worm, and Black Bough.