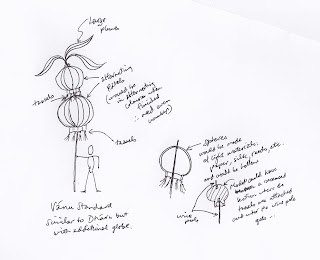 The banner of the Gurék of the City of Vánu

Sister city to Dháru, Vánu also fields a gurék in the Baron's cause. As they wear similar armour, I decided to make the banners somewhat alike. Whereas the panels of Dháru's banner would be green and red, with gold trim, Vánu's colours are silver and green with red trim.
Posted by phf at 17:17 No comments: 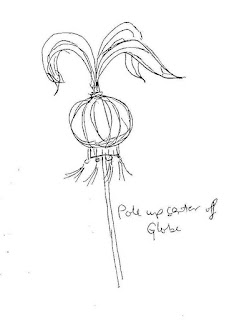 The Red and Green Banner of Dháru

I have commissioned Andrew May to do the command figures for this gurék and it's sister, the Gurék of the City of Vánu. The illustration is of the proposed banner. The colours would be bright green and red (a surprise that!) with gold trim. It would probably be made of coloured silk and so very light despite the large size of the globe.

The banner for the sister gurék will be similar as the two cities seem to be "twinned" in some way. The suggestion is for a second, smaller globe above the first with the plumes at the top.
Posted by phf at 10:30 No comments: 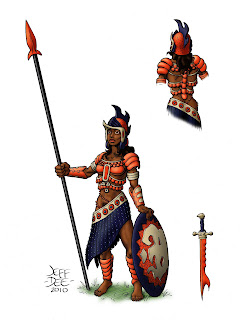 Shown is a trooper from the Aridáni Legion of Lady Mríssa. The uniform colours are derived from the description in the Tsolyáni Army Booklet, which is vague to say the least. This is just one interpretation.

We have started taking pre-orders for this unit. The greens arrived the other day and are going in the mail to RAFM for molding and casting today or tomorrow.

They will be organized into Warbands and Hordes per our usual practice.

We accept checks or money orders (in US Funds) made out to The Tekumel Project, but we prefer PayPal to the following email:

Postage is a flat rate:

If you want information or have questions please send me an email.

Our figures, as sculpted by John Winter... 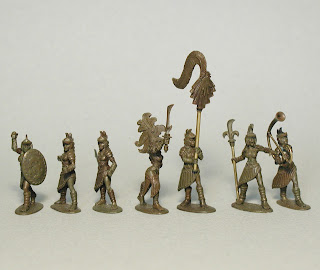 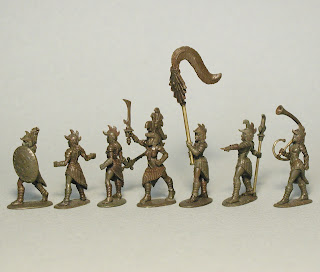 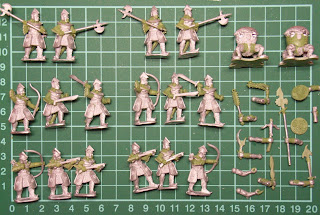 I found a pic Allan sent me of the completed figures (plus the Ahoggyá bits.)

The cities of  Dháru and Vánu are on the coast in north-eastern Yán Kór. The halberdiers usually fight paired with a man with sword and shield. The latter protects the pair from missile fire with his shield. Such combinations are common to Tékumeli warfare. One formation popular with the Yán Koryáni is known as the "Meadows of Death". When adopted, lighter missile-armed troops are interspersed with heavier, melee troops. 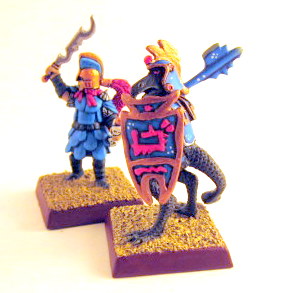 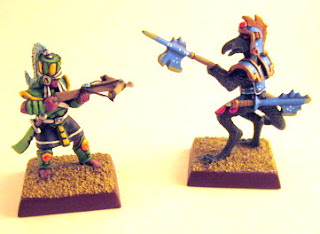 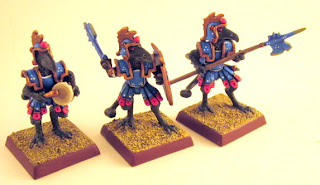 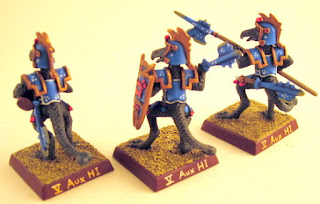 Akársh was kind enough to send me pictures of some of our Shén he has finished. I especially like the detailing and trim on the weapons and armour. Also in the pictures are an officer from the Legion of Ever-Present Glory (top) and one of our Yán Kóryani crossbowmen. He also sent a size comparison picture with one of the original Old Guard Shén. 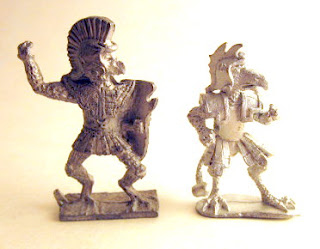 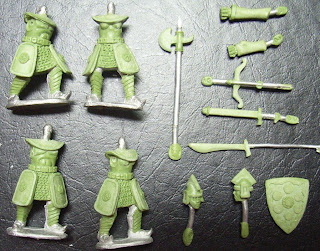 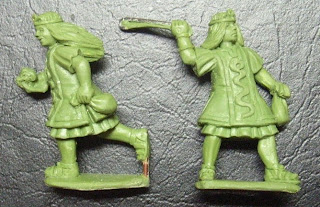 Clan of the Silver Worm 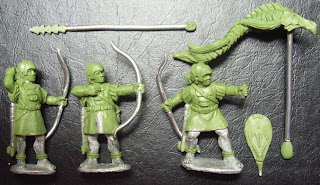 All sculpted by Allan Marsh

These are all greens that Allan did for us some time ago. The topmost figures are blanks; they have long since been put together. There are four with halberds, four with swords, four archers and four with crossbows; two males and two females of each. All that is missing are command figures. I had been holding off waiting for the command to get done, but now I am thinking to go ahead and get the basic troopers molded anyhow.

There was also a delay because the metal forming the masters was of the same type as has been giving us so much grief with the Ahoggyá and the Shén. Now that we seem to have got that monkey off our back the road is open for a huge backlog of stuff to be released!

The Clan of the Sliver Worm skirmisher girls are meant to go along with Silver Worm troops which are basic Yán Kóryani. Unfortunately the basic troops are stalled, being part in Australia and part over here. I was waiting to bring these out but again have had another change of heart and decided to go for it.

The Mákhis longbowmen were also intended to be accompanied by regular Yán Kór troops. Same story as above.

So a little later this summer these will be going off to get mastered and cast. Not sure when they will be available. The intent is to provide them as singles, or as Warbands and Hordes per our usual practice.

I have been working out pricing for these and other human troops and I think it will be as follows:

Tekumel Club members would, of course, get their usual discounts (40-50% off.)

This pricing will apply to the forthcoming Lady Mríssa figures. Non-humans or figures that are over-sized or have lots of extra parts might be priced differently but for basic human types this will be our goal for pricing.

Let me know if you have questions, comments or suggestions. All the above, and the Aridáni Legion of Lady Mríssa are all available for pre-order if you wish to do so.

The Gang's All Here!

Here are the finished figures for the Aridáni Legion of Lady Mríssa, 19th Imperial Medium Infantry. As you can see they meet John's usual high standard of perfection!

Available to pre-order, from the original 25 of each:

5 sets of armoured;
9 sets of unarmoured.

So Blogger has messed up my template and I can't see how to fix it right away. I suspect I will have to start all over. It seems to only be offering me the option to "upgrade", but nothing else. "Upgrade" in this case means changing and "fixing" things that didn't need to be fixed.
-1 to Blogger!
Posted by phf at 17:41 No comments: 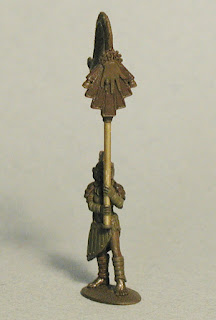 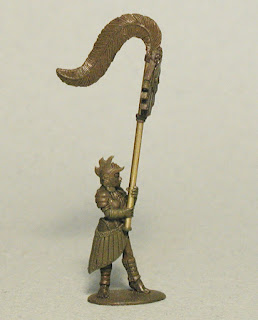 By John Winter
Here is a picture of the Standard Bearer for the Aridáni Legion of Lady Mríssa. This legion is nearly completed. I hope to have it ready for release before the end of the Summer! :-)
Posted by phf at 17:28 1 comment:

Singles are available as well.

Our 28mm Ahoggyá are currently in production and I am opening the pre-orders on them. There are armoured and unarmoured versions. They are done with resin bodies (cast with legs attached) and metal arms. There are IIRC 12 different arm variants which will be supplied 5 per figure (one extra to allow for some customization.)

They are being sold in sets of 10 - either armoured or unarmoured for $110US per set. Singles can be ordered for $11 each.

Tekumel Club members will of course get their club discount (typically 40-50% off.)

As is our policy I have offered the pre-order to Tekumel Club members first and of our initial order of 25 sets of each type the following are still available: 9 x armoured, 13 x unarmoured.