Get Your Free Figure! 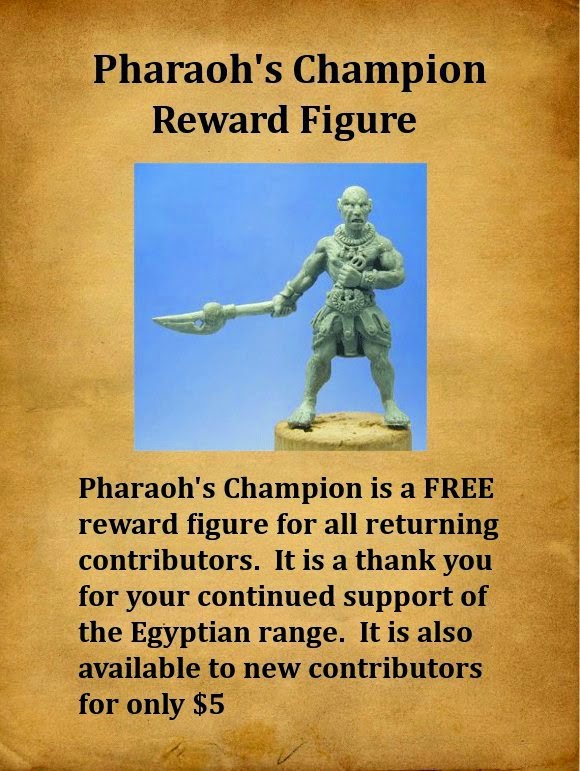 Did you contribute to any of Dark Fable's previous three Egyptian Indiegogo campaigns? If so, don't miss out on your free reward figure!

22 days to go and lots of cool stretch goals left to unlock...

And, yes, I am a contributor. I think this range offers a great many figures that are perfect for Tekumel!

Putting together a Command Platform... 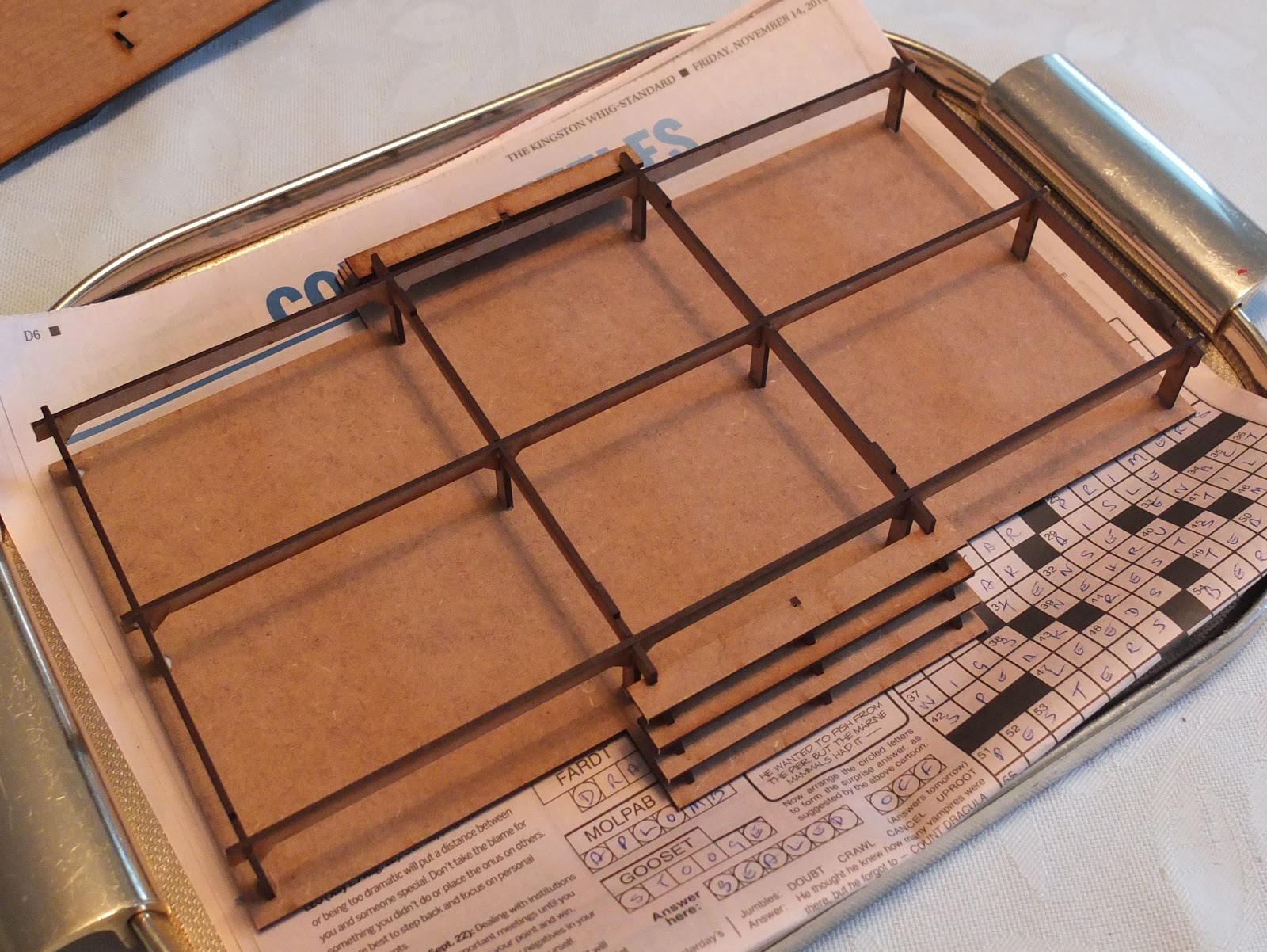 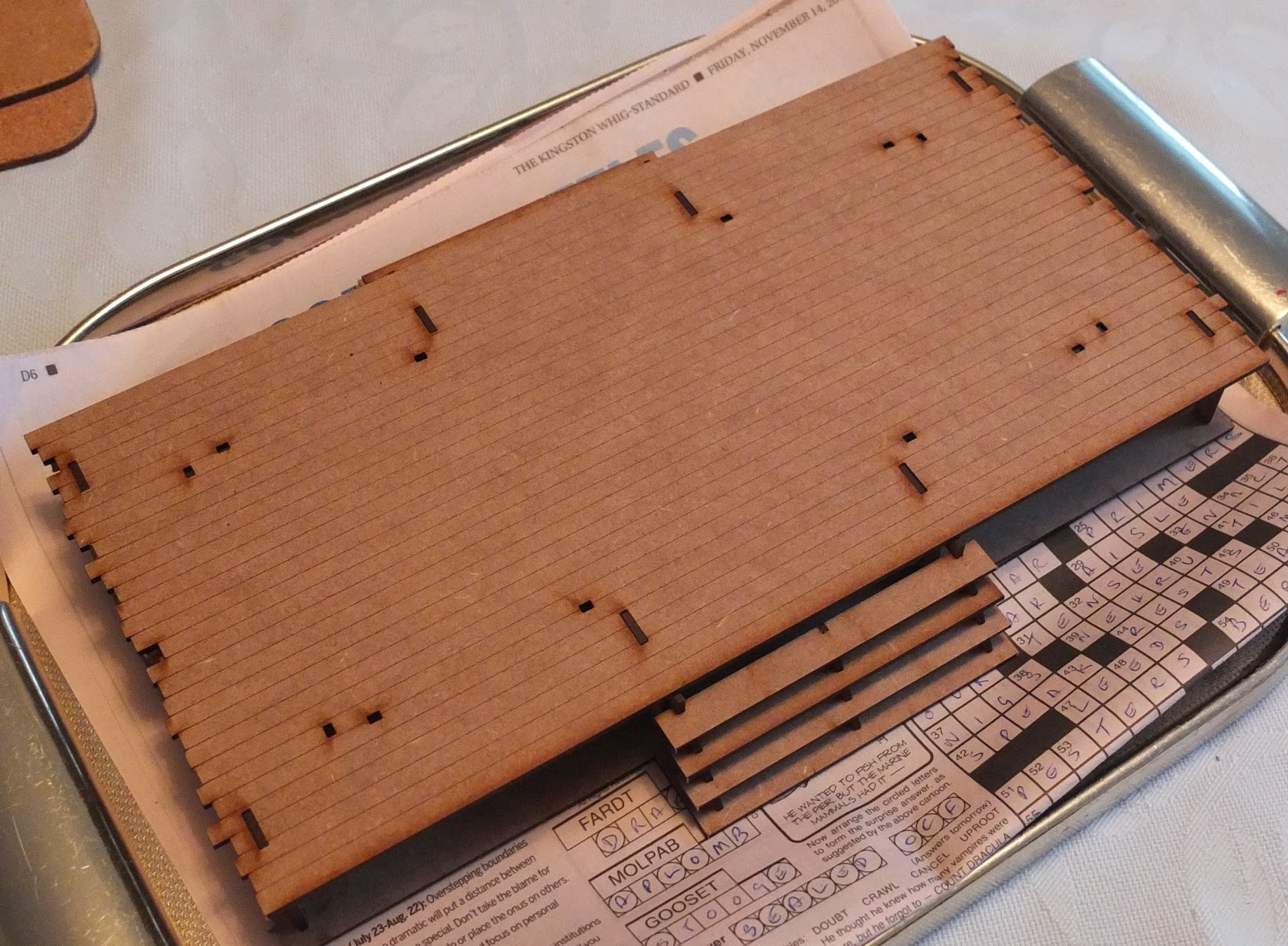 Actually these go together so easily that you hardly need any input from me. I just wanted to touch on some things I've encountered.

1) The building is designed so the roof comes off, but in doing so they designed it so that the walls were intended to be glued to the platform. Of course, I want the platform but then would like the option of using it for its original purpose - and I still want the lift off roof. To do this I have to leave the holes in the floor. No problem there, as I am intending to have rugs and daises (and people) covering the surface anyway. The problem is going to be with the walls of the structure which are pretty flimsy, being very open. My solution is take the triangular cutouts from these same walls and glue them in the four corners - top and bottom - to act as bracing for the structure. I will then just have to build a box to keep it in to make sure it doesn't get bashed about.

2) I am going to glue the platform in place but I want to finish the base before I do that. If I were just using it as a command platform just set up for the battle I would do the base as normal for my bases. But I want to use it for its original purpose and I am thinking it might work well with our upcoming Swamp Folk. And guess where they prefer to live? My current thinking is to put tufts of grasses around the perimeter and slightly under the platform but to otherwise to the base in irregular areas of sand. If I then use black or black/blue or black/green for the inside part of the base I might be able to make it look like its in shadow and also leave the possibility that the ground is swampy. Or is that expecting too much?

3) The other thing I am considering is whether to paint the platform or not. I have an idea to paint it a blue suitable for Tsolyánu and perhaps weather it a bit. Or should I leave it the "natural" wood?
Posted by phf at 22:56 1 comment: 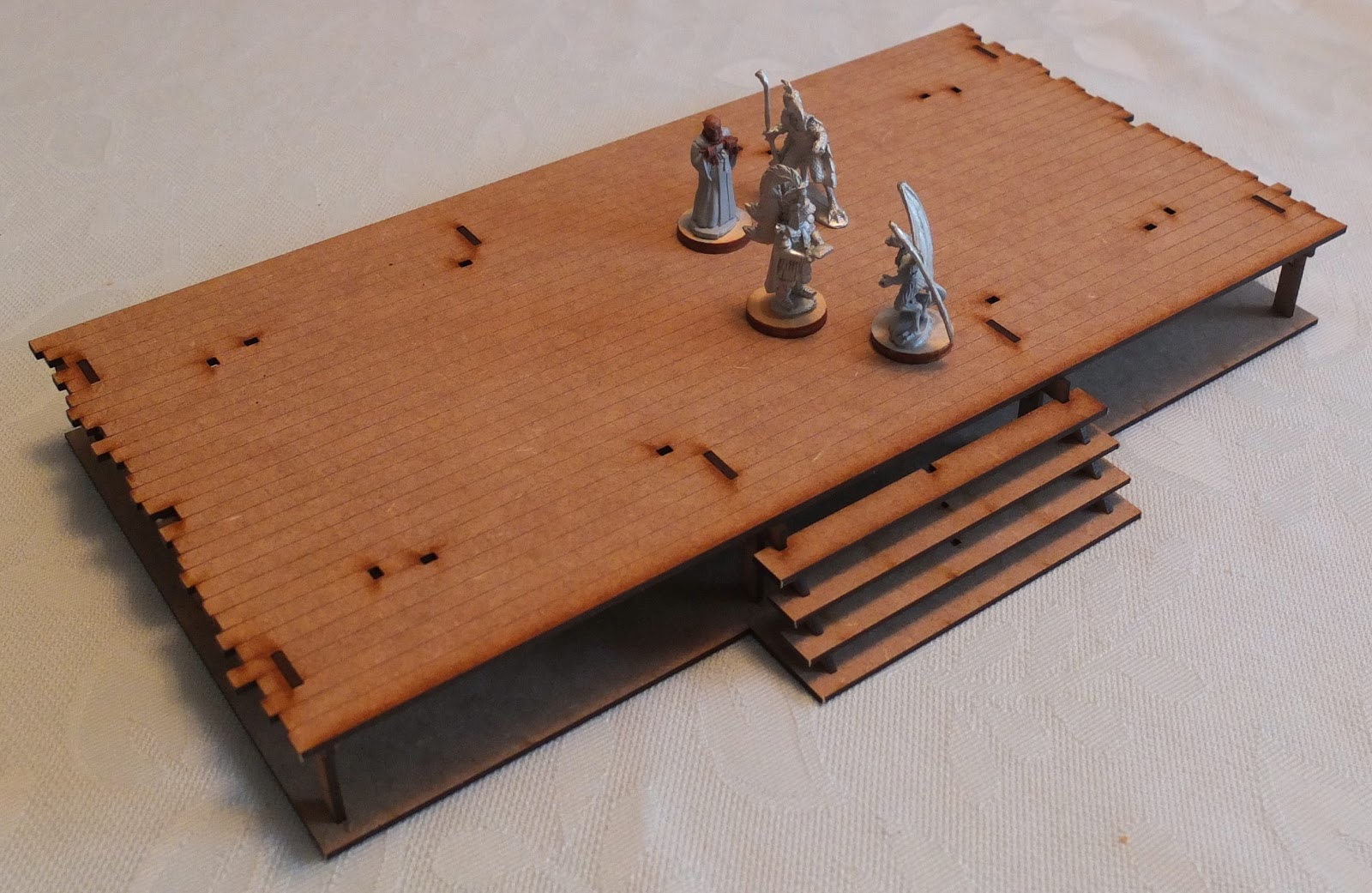 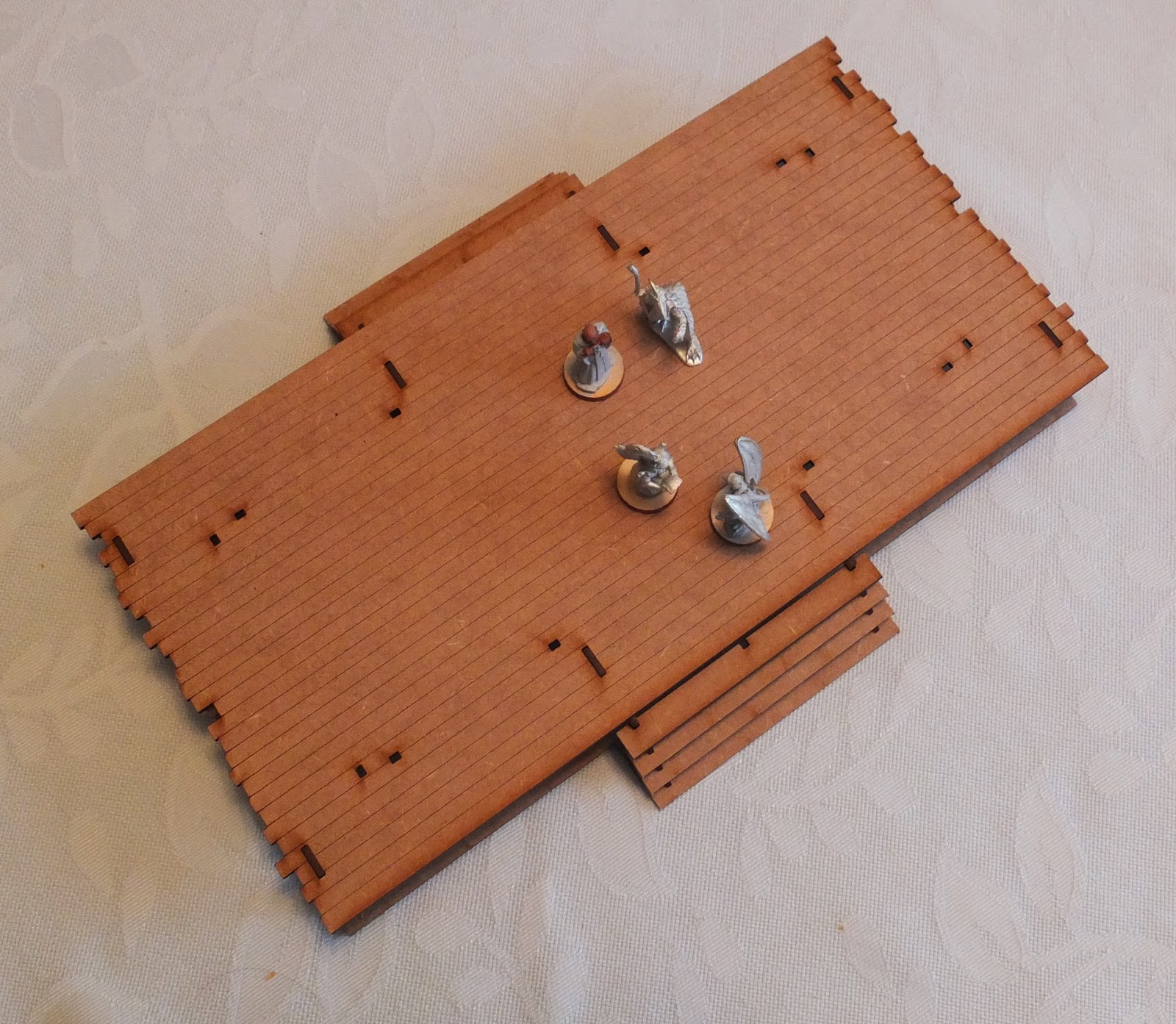 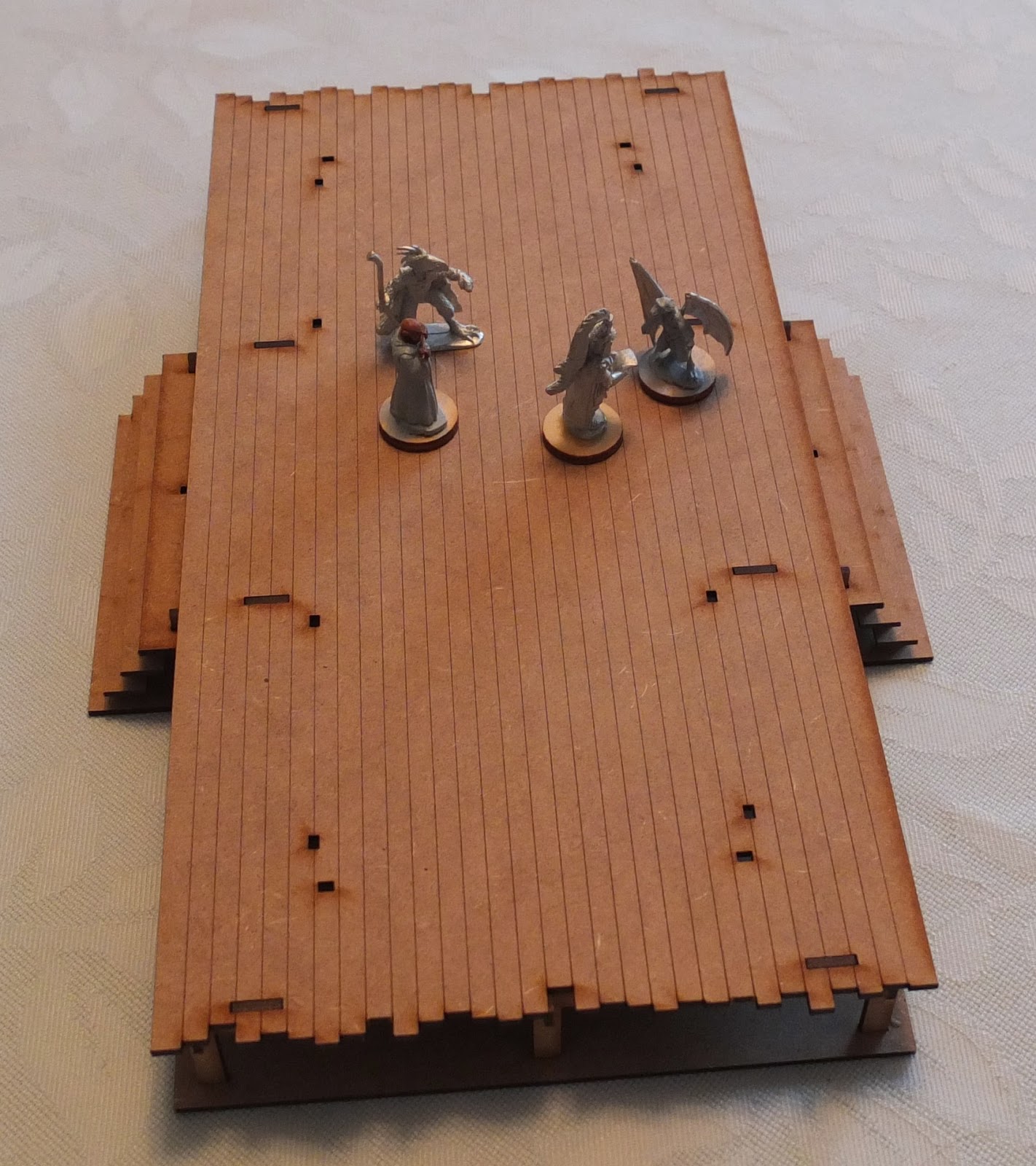 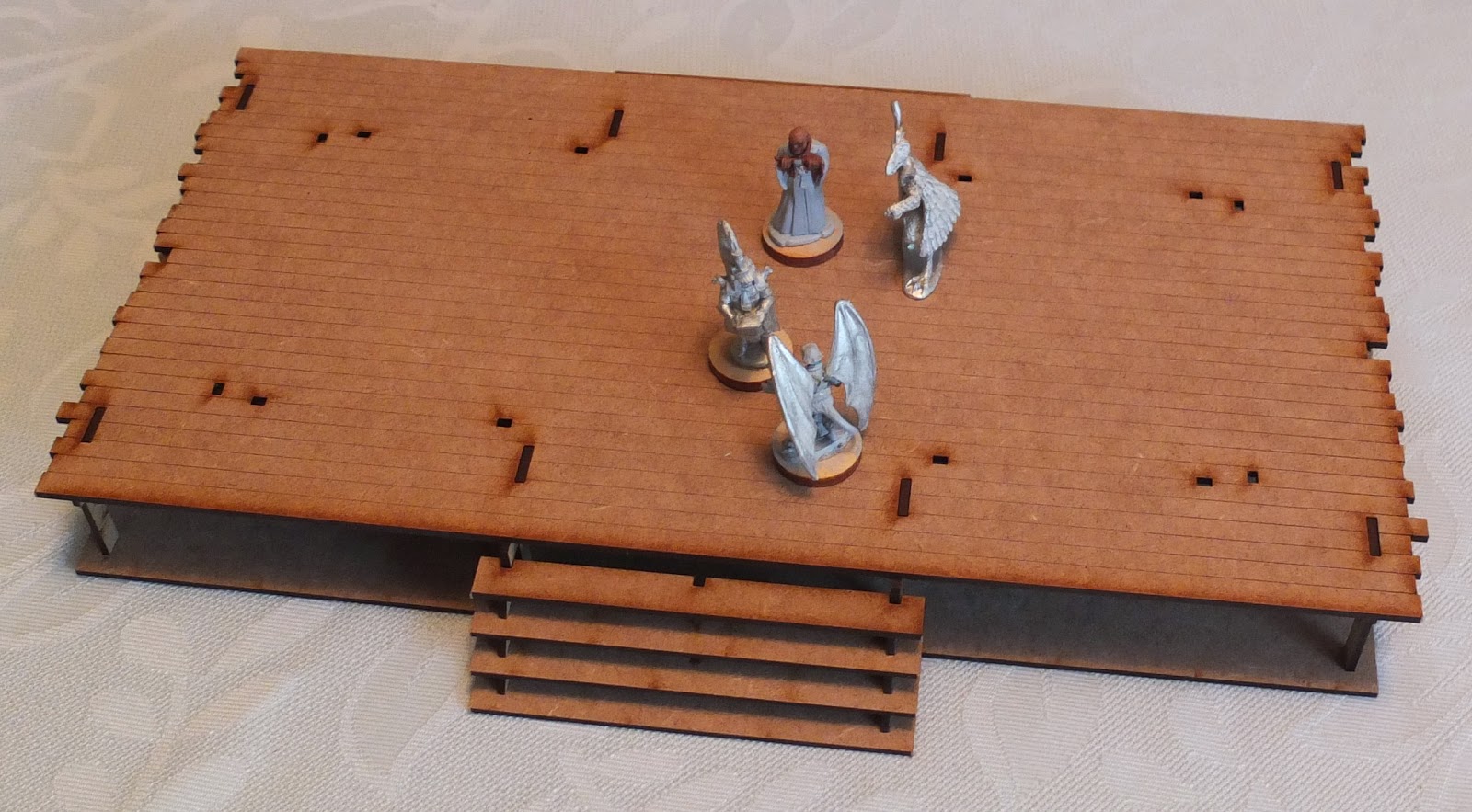 A Command Stand any Imperial Prince would be proud to own!

I short time ago I was made aware of some new laser-cut MDF buildings from a UK company called Sarissa Precision. They make a number of very nice buildings, carts and wagons, boats and bridges, but what really caught my eye was their range of "Far East" buildings.

When I first saw them on the Shadowkings blog it immediately occurred to me that the platforms might serve as command stands. So after some consideration I ordered the large Community Building. I knew it was going to be big but what attracted me to it over the others was that it had three steps up instead of two and the steps were wider and were placed front and back.

And it is quite large! The platform measures 6" x 12" if not exactly then very close to it. Is that too big? There are a couple of smaller village houses to choose from, some of which are on tall stilts (which I think rules them out) and some which are L-shaped rather than rectangular. There is a low rectangular style, with the two steps mentioned above. This might be a possible, smaller alternative. There appears to only be a single set of steps.

Myself, for the main field army - led by an Imperial Prince or High General - I think that the larger platform works pretty well. It will accommodate not just the Prince and his aides and generals but also possibly the large war drums that are used. And there is room to have the offensive and defensive magical contingents flanking on either end.

The smaller platform might be an option for a smaller force - or if your table size creates limitations.

I had intended to eventually produce a command stand but I was thinking of getting one made from resin. Or resin and metal bits. I envisioned it having carved wooden supports and totems or stelae and being decorated by many banners. (The irregular finish to the ends of this platform are a minor thing I don't like - I think the platform would be better finished.) I think the commander and his sub-generals would stand or sit on daises or piles of rugs to delineate their respective statuses. There would perhaps be scribes and slaves in attendance, or standing near at the ready. Also runners and junior officers. These would perhaps be at the foot of the stairs as would a contingent of bodyguards. Perhaps tapestries would be suspended between the posts along the edge of the platform? Or banners draped over the edge?

I think it has the potential to make a really nice display piece! :-)

What I am going to look into is getting some accessories made that could be used to dress it up a bit. And I'm going to order a smaller version to make a better comparison.
Posted by phf at 11:11 No comments: