The Emperor is Dead! Long Live the Emperor!

I was happy to pick up 50 sets of our Imperial Messenger Vignette yesterday on the way home from work, along with the balance of our Hlaka order. The pricing on the vignette will be $12US for non-members.

Legion of the Clan of the Sweet Singers of Nakomé 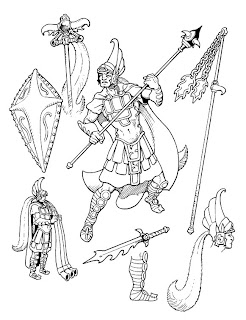 
More concept art from Jeff Dee, this one from the Tsolyáni order of battle. The illustration depicts the Legion of the Clan of the Sweet Singers of Nakomé, 12th Imperial Heavy Infantry. The origin of the name is obscure because "Nakomé" refers to a clan-less person in Tsolyáni.

I am leaving shortly to head up to North Bay. Returning Sunday.

I am happy to announce that our Imperial Messenger Vignette has been cast and is on its way. This vignette depicts Prince Eselne reading a message just delivered by a Hlaka messenger in Imperial Service. I have no pricing as of yet. With Easter being - like - tomorrow I don't expect these until next week, expecially as the Post Office will be closed Monday as well as Tomorrow. 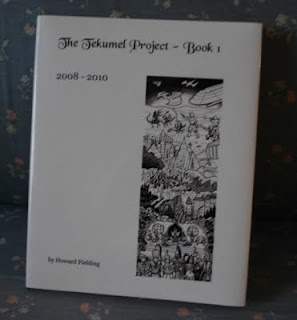 
Some of you already know I've been looking into using Blurb.com to publish "A Band of Joyous Heroes", "Kerdu" and a background book (or books) for Tékumel. Blurb offers full colour publishing in soft-cover, hard cover with a dust jacket and hard cover with image wrapped cover. I can't speak to whether they are the cheapest but I found them to be very user friendly. For the record, I also looked into Lulu but when I had questions I didn't get answers but requests to "upgrade" my account. So I went with the guys who gave me answers: Blurb.

I wanted to find out how Blurb's quality was so as a test I used a feature that might interest those of you with blogs of your own. I decided to make a "yearbook" for The Tékumel Project. Blurb allows you to "slurp" your blog into one of their layouts automatically. The links are turned into footnotes and the pictures show up as margin thumbnails. The latter you can move around and manipulate afterwards as you like or you can keep them as thumbnails. There is probably going to need to be some adjustment to make sure the picture is aligned properly even so as the process tries to "fit" the photo as best it can and automatic processes only work so well.

As my first two years as a blogger were pretty pathetic, the book covers everything up until the end of December 2010. I reformatted some of the pictures, making them a good size on the page and fixed some of the thumbnails, but I was eager to see the results so I didn't spend as much time doing that as perhaps I could or should have. To me, the content is mediocre but the final physical product was worth the test.

I am very impressed by the result. It cost me about $44CDN give or take and rolls in at 115 pages, hard cover with a dust jacket. Not bad, methinks. Imagine if the content were more worthy or the pictures full colour...

Note that the picture on the cover is blurry b/c of my crappy photography skills, not in actual fact!
Posted by phf at 19:46 No comments:

My Gaming Blog: Heroes of the Age

I've started a new blog devoted to gaming on Tékumel, which I'm calling "Heroes of the Age". 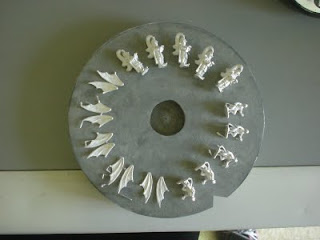 Figures on the Mold...
I have had an email from Brock (RAFM) to the effect that the Hlaka Messenger Vignette has been molded, cast and 50 sets have been mailed out today. :-)

Update: April 21st. I guess these were just being molded and cast, but then the balance of our Hlaka order (from what we picked up at Hot Lead.) was cast so the completed Hlaka release should be on it's way today. Apologies for the mis-information!

The Vignette consists of a Hlaka Messenger in Imperial Service and Prince Eselne, an heir to the Imperial Throne, receiving word that the Emperor has died and one of his brothers has seized the throne.
Posted by phf at 18:35 No comments:

This Is Not An Update!

Borrowing from "The Prisoner" just a bit, here is my non-update non-post of the week. Sorry for the lack of news, but there hasn't been any reportable progress to report. And last week was just crazy for me time-wise what with working late most nights, and finally getting a proper family doctor after about ten years without!

Well, OK, I guess there is stuff to report - sort of:

I might be delving into Original EPT - and I might start a blog for that so I can ramble on without interfering with the Tékumel Project stuff. I recently started to take a closer look at the old rules and I am wondering how bad it would be to use them with all the newer ideas just grafted on...

And I may also start a blog for "A Band of Joyous Heroes" which I haven't given up on - no siree.

I've made some progress on the background books which I think some of you know I've been working on. Not so much writing background, as such, just trying to come up with ways to present it differently. As picture books, with some text descriptions, but primarily art depicting various aspects of Tékumel . Initially I was thinking B&W because of expense but now I think they will be primarily colour with some B&W. The intent is that these books would be entirely "rules free". I've made contact with one colour artist I really like, and have feelers out for others...

On the miniatures side there are some resin beasties in the works - did I post a picture yet? Nothing big, just one that I have been calling the "Bloated Servitor" and another that under D&D is called a "Nightmantle", if I'm not mistaken. These are supposed to be in the molding casting - or in the queue to be done (there's always a queue, isn't there?!)

Also in a queue is the Hlaka Messenger vignette which is being molded or may have just been molded this last week. I have requested 50 sets. I haven't tried to work out a price yet.

No word on how the casting troubles we recently had with the Ahoggya masters are working out - replacements are on their way from Australia.

I have also recently commissioned some figures to fill some other gaps in the range, namely the Renyu and Tinaliya.

Lastly, today I found another artist who does "monster" sculpts who I think might be interested in doing work for us... 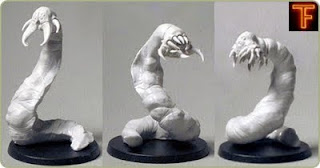 By Troll Forged Miniatures
Wait until The Drune gets a load of these puppies! Ix will never be the same! :-)

For more typical Tékumel gaming they are perfect denisons for one of Lord Sárku's temples or shrines...

They can be found here: Troll Forged Miniatures
Posted by phf at 14:25 5 comments:

The Good News is that I have 16 sets of Hlaka armed with firepots and 16 sets armed with javelins. That is I had them when i returned from Hot Lead but I offered them to our Tekumel Club members first. There are still some left, and more are being cast so not to worry, there should be plenty to go around!

Each set comprises 4 flying Hlaka and 4 grounded Hlaka armed with the appropriate weapons. There is also a grounded leader who is sold separately.

The base price is $30 per set for non-members, or $4.00 each for the leader. Members receive their usual discounts.

We are having casting difficulties with the javelins because they are so fine - so much so that more were being rejected than accepted. When I heard that I told the caster that as long as the body and tail comes out fine it counts as a good figure - the difficulties were adding too much labour to the casting. What this means is that in the future not all the Hlaka will have the fine cast javelins - customers will be asked to supply their own. These few initial packs however, all have the fully cast javelins.

The second item of good news is the the Imperial Messenger vignette is being molded and will be cast very shortly. This is a two-piece set of Prince Eselne receiving word of the Emperor's death via a Hlaka messenger in Imperial service.

The last bit of good news is that our resin caster is making molds of two Tekumel beasties which you can expect to be released very shortly. I post a picture tomorrow perhaps...

The Bad News is that we have encountered some technical difficulties with the Ahoggya and Shen which will delay their release - though how long the delay will be is unknown at this time.

Apologies for this but it can't be helped.
Posted by phf at 19:56 No comments: