Most recently I discovered that the photos I insert in my blogs were coming up in some weird sort of display. A "light table overlay" is the new default apparently - something I discovered only by rooting around in the settings and changing it to "off".

It annoys me that I had to go in and change the settings. They are behaving in the same way that makes me hate Microsoft so much. Grrr...
Posted by phf at 14:09 No comments:

Remember Remember the Fifth of November 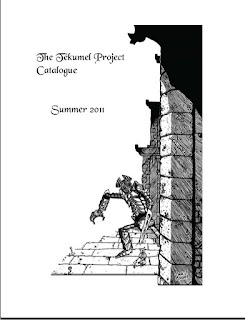 After long delay, the Shén are finally going into production. For those of you unfamiliar with Tékumel, the Shén are reptilian aliens that followed humans to Tékumel. They live in the hot South near the equator – and by "Hot" I mean Hotter as Tsolyánu is hot as it is! Many Shén serve as mercenaries in the armies of Tsolyánu, Salarvyá, Mu'ugalavyá, Yán Kór and Livyánu, the five great empires that rule this hemisphere of Tékumel.

Note that this applies to only slightly more than half of our Shén figures. This is because the master figures share a mold with Eureka's figures so I don't have access to the Master mold. I have master figures but they suffer from the same difference in metal type that plagued the Ahoggyá. These will require low temperature molds before we can begin production. This really sucks, but there is little we can do at this point. Little did we know what path things would take when the figures were first made!

Anyway, going into production are:

NOT YET AVAILABLE - Waiting for low temp molding and/or accessories:

Tékumel Club members will of course benefit from their usual club discount.

The intent is to finish the remainder of the Shén next and assuming no major hiccups with that, then moving on to the Ahoggyá.

We will be offering additional shield types for the Shén as well, to match other legions in mercenary service throughout the Five Empires.

Email me at the address below, and I will send you the PDF directly.

Thanks you all for your interest and support. I hope you enjoy our figures.