I have been trying to decide on "New Years Resolutions" or whether even to bother, as I never seem to accomplish them.

Hope everybody has had a Merry Christmas! :-) 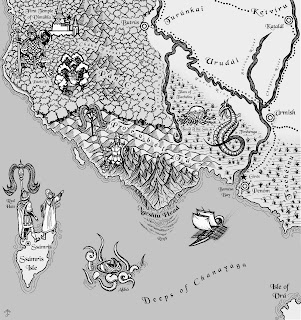 This was an early attempt to make a series of maps done in the fashion of the original Empire of the Petal Thrones game box. Rather than a "proper" map, the end result would be as much picture as map. I have since decided that this version is not quite what I'm looking for. What I want is even more busy - with more figures and scenes of life, symbols and non-mappy stuff, if you get my drift. It is possible that it will be less "accurate" and more representation, with more geographic distortion as accompanied RW maps from earlier eras. Also, I might "zoom in" a notch and cover smaller areas in greater detail.

The original concept was that this map would be on the left facing page of a book, with the eastern part of the Southern Coast on the right hand facing page. Could still happen, as I am toying with the idea of going with some sort of large landscape style book for the final product.
Posted by phf at 08:05 1 comment: