Heading down to the Hot Lead convention in Stratford Ontario shortly.

There I will be speaking with our caster/mold maker about how to set up the molds for our upcoming releases. I am taking with us the greens for the Sacrifice Set, Princess Vrisa, the Pillars of sacrifice, the Puppeteer Vignette, the Ahoggya Kits and the Shen Masters Nic sent us.

We just have to figure out how to mold all that!

I am hoping to pick up some Hlaka castings (with the balance of the order to be mailed to us) and some helmet and standard plumes for use in conversions.

I am also taking a couple of sirprises - that only a few people know about - to get Jeff Trnka (our resin caster) to take a look at.

I will report back when we return on Sunday.
Posted by phf at 10:02 1 comment:

A Worm for Lord Sárku

Over on the Frothers forum, Hive Trygon has posted some pics of a sculpt he has been working on. To my mind it would make a perfect servitor for Lord Sárku, whether in the depths of the Underworld or in some Inner Shrine of the Temple of the Worm Lord.

It would not look out of place as an encounter in Ix's Humanspace Empires, either...
Posted by phf at 17:29 2 comments:

With the upcoming release of our Hlaka figures I am getting excited again. I am very hopeful that I will have quantities of these in stock by month end - I am hoping to pick the figures up next weekend, in fact, when we attend Hot Lead!, in Stratford, ON. (Note: we are attending as gamers, not dealers.)

As 1/2 of the figures are airborne poses I have been starting to think about flying stands. One could just mount them on slottas, or similar bases, or on those little plastic ones GW uses. Or you could use a piece of wire going to some other base - this is what I had intended to use myself.

After recently attending Cold Wars, however, I have another idea. While at the convention I picked up some flight stands intended for the "Check Your 6" WW2 Air Combat game by a company called Armaments In Miniature. These are resin stands that use a telescoping car aerial with a powerful magnet at the top. There are several styles , and I picked up some of the largest two styles to try with my Air Cars.

I was just putting one together and it occurred to me that maybe I can use it for my flying Hlaka. Each stand comes with a metal screw intended to go into the model, the flat top of which snaps tight to the magnet at the top of the stand.

What if I wind wire around the screw with a flying Hlaka at each end? I could mount several Hlaka around each stand...

Now I don't have any castings to try this out but I did try a large washer with several 28mm figures on the stand and it balances fairly well. And this was without any extra weights in the base (the largest models allow one to insert pennies to make the bases heavier.) I think that if the figures are spaced fairly evenly around the stand it will be pretty stable. In addition to looking nicer, the telescoping bit has 6 increments, allowing for different heights to be used. Now this may not be relevant to your rule set but it could make the models more esthetically pleasing regardless.
Posted by phf at 17:15 1 comment:

Now is the time to let me know if you have ideas for poses or character types we have missed for the Qól.

Add a suggestion in the comments or email me at:

"Cold Wars" that is - we arrived back from the HMGS-East "Cold Wars" convention in Lancaster PA this afternoon after a nice seven hour drive. (Unlike the trip down which was taken in rain and, in some places, very thick fog.)

I had a great time: played a few games, caught up with some friends and bought a bunch of stuff. Made some good buys, including some sort of [Battletech] Drop Pod (?) from Iron Wind Metals which I think will make the nice basis for one of the spherical tube car designs. They had a few "seconds" that they were selling for half-price ($15) as there were slight irregularities in the molding. The thing isn't really a sphere, but is shaped more like a 3" round resin teardrop with the "tail" cut off flat just where it starts, forming - for my purposes - a handy base for the car. I think that once the car is placed in the appropriate circular tubeway entrance this will not be visible and it will appear like a perfect sphere. The slots for the leg struts from the original pod just need to be covered with card and a door crafted and it is done. I think the door could be one of those card pieces that will cover the slots or, perhaps better, one of the conveniently placed rectangular panels in the side.

Update: It is a "Union" drop pod per this painted example on CoolMiniorNot. In this example, one of the slots for the legs is front and center in the pic. There are four of theses spaced about the body. The flames are where the truncated part of the "teardrop" is. Front-left is one of the rectangular panels that I am considering converting into a door.

Update 2: Here is the link to the thing on the Iron Wind Metals site.

I also took a gander at the new Qól figures that Rod has done for us - they are Sweet! :-) I have asked him to do a couple of more figures:

(1) a figure standing "at attention" such as a guard - this could then have one of the halberds, standard or lanterns that are borne by the other figures, and

(2) a figure with a large open book. I previously showed a picture of a Qól carrying an ornate box which some took to be a book so I thought I should add a book.
Posted by phf at 21:53 No comments:

This is one of my Pet Peeves about Tekumel. The various Tsolyani pronunciation guides that have been published over the years which though apparently intended for English readers, reference languages other than English when trying to explain how to say all those weird names.

The main one being the "ü", as in: N'lüss. We are told to pronounce this in two ways, depending upon which part of Tsolyanu we are from: "In western Tsolyanu , the "unlaut ü" of German; in the east it is a high, back, un-rounded vowel, like the "undotted i" of Turkish"!!!

Oh-Kayyeeee...and you think this is helpful - how? Did I mention that we're ENGLISH speakers!? That means: no German, no Turkish, and don't even ask me to figure out what a "high, back, un-rounded vowel" is.

Now I think the "ü" might be "Ooo" - at least the German bit, but I don't recall if I looked it up somewhere to figure that out. That means that "N'lüss" might be pronounced NUH-Loooss - or it might not...

Update: This according to Google...

Update 3: my other example of this peeve is the "GH" - which is described as "a soft, frictive "g", the Arabic Ghayn; not in European languages."

I found some pronunciation help via Google again:

"I speak only a few words of Arabic but one self-instruction book I have says that this sound uses muscles that are not used by English speakers, except when they throw up." 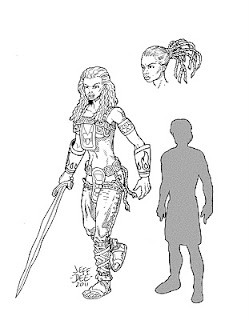 An Aridani N'luss
This is the last of the present lot of concept sketches Jeff Dee has done for the N'luss. We had considerable back-and-forth debate about the "look" which is based upon a number of things. From the Mu'ugalavyani Army Book we know that not all N'luss warbands are as well equipped with armour as others. And from the Swords & Glory Sourcebook we know that N'luss women tend to cover their legs with leggings. This is confirmed by the descriptions of the N'luss bodyguard in The Man of Gold.

Running somewhat counter to this are the descriptions in the later novels of N'luss wearing "pantaloons" and tunics, bringing to my mind at least images of Vikings, particularly "Jomsvikings", who appear from the illustrations I've seen (and miniature representations) to be the "dandies" of the Viking world.

These descriptions contradict all other descriptions and illustrations previously published. Perhaps they refer to some fashion among the city-dwelling N'luss that distinguishes from their wilder brethren of the hills (though I would never call any N"luss tame!)

Regardless, what I was looking for was an illustration of an Aridani warrioress from one of the poorer warbands. I think this illustration fits the bill nicely.
Posted by phf at 10:48 1 comment: 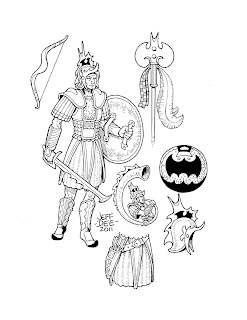 My Current Favourite Song! (And I can barely speak French!)

EDIT: And here are the lyrics translated!

On a more Tekumel related note I took receipt yesterday of my first "book" published using Blurb.com - that is a sort of "yearbook" of the Tekumel Project Blog from 2008 until the end of 2010. Not much content-wise but I am impressed by the quality of the hardcover book that Blurb produced. This is how I intend to produce A Band of Joyous Heroes so this was a bit of a trial run. I think it took about two weeks from the date ordered to get the finished product.
Posted by phf at 22:11 No comments: