The Tékumel Project would like to wish all our family, friends and associates: artists, sculptors, mold-makers and casters - and all our Tékumel Club members - and, for that matter, any and all interested in Tékumel - a very Happy New Year!

And that goes double for Professor M.A.R. Barker, Tékumel's creator, and without whom we just wouldn't bother! :-)
Posted by phf at 14:24 1 comment:

"Not the Bore Worms!" 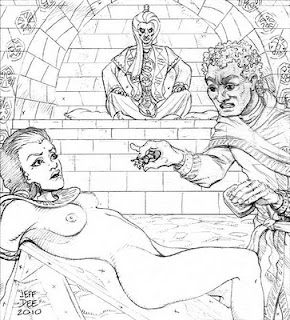 Not the Bore Worms!


Readers of M.A.R. Barker's The Man of Gold will no doubt recognize this scene. The quote is, of course, from Flash Gordon - appropriate I thought, but otherwise unrelated...

(well, almost) - arrived Christmas Eve, in the form of a parcel from Nic at Eureka Miniatures.

Inside were various unreleased Masters and Greens. :-)

I have slowly been examining the contents:

Ahoggya bodies - armoured and unarmoured variants plus a slew of arms - IIRC, there are 3 different swords, a mace, a ball and chain, a heavy spear, crossbow, pointing hand, clenched fist (designed to be drilled out to hold something), and a shield arm. Also included are the quiver for the crossbow bolts and the same shield only not attached to an arm.

Question: What would an Ahoggya Standard look like for one of their mercenary units? Would they have one? Perhaps something like a Shen standard?

Yan Koryani - Heavy Archers. In scale mail. Intended to be used to make the Rulla Gurek. Includes Persan style bow/arrow cases. Still need to convert some YK Heavy infantry to also have bows with their normal weapons to be the other Rulla troopers - need to add straps to the basic sculpt, Also Standard and shield - possible unique weapons, but I can't recall.

Clan of the Silver Worm - 2 poses of skirmisher girls. These look to be girls in mid-teens I would guess based upon the size. Also Standard, shield and particular weapons for the regular troops.

Defense Against Evil - the YK Gurek. Standard, shield and weapons.

Makhis Gurek - Archers, standard, shields and weapons. I think some more figures are need for this, though we could release the longbowmen before the rest of the Gurek, I suppose.

Dharu and Vanu - the greens Alan did last summer, plus all the shields and weapons. Standard still needs to be done, as do the command figures. Probably get the clan Leaders done as well. Might still get a variant of the Halberdiers and Swordsmen done in armour more like the art - probably get John Winter to do this.

Various other Yan Kor troops that we had done a long time ago (when Alan did the head swaps.) I haven't looked at them all, but they look to be the two handed sword poses, at least: 2 x male, 1 x female times 3 head variants for each. These were, IIRC, for the Clan of the Black Bough. Still need standard design for this unit.

The next stuff I ask Nic to send will be some of the Yan Koryani molds - including a mold of just helmet plumes - and yes, these will be available separately! There are molds for weapons as well so expect to see weapons packs as well. And I expect each shield design will be available for purchase separately as well. Also the Hlaka - which have one mold for bodies and another for wings.

The Shen - I have masters for these, but the master mold will also be sent over as well. Expect these a soon as I can in the New Year. I hope to do more Shen in the Future as well.

All this made for a very enjoyable Christmas - not to mention one of my brothers dropped by with his family - turns out one of my Niece's has a gamer boyfriend. She said he'd get along well with her Dad and Uncles as "He likes computer games like Dad, he paints figures like Uncle How, and is Smart and likes Engineering stuff like Uncle Stuart!!!" :-)

Hope everyone else had a great Holiday Weekend! :-) 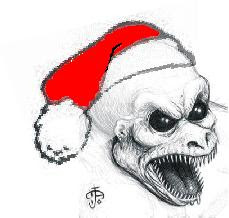 
We here at The Tekumel Project would like to thank all our customers, sculptors, artists, Tekumel Club members and Followers for supporting us and helping us to move forward during this last year! Hope you all have a happy and safe holidays!

Howard Fielding (and the Tekumel Project)

A question was asked on the Tekumel Yahoo group about purchasing our figures painted. I have made enquiries in that direction and have created a poll on the yahoo group to gauge interest.

Here is a link to the group.

Note that I am not talking about cheap plastic D&D pre-paints here. This would be our figures painted to a good or very good quality by an overseas painting company.

I am not sure what the prices would be like, but an effort would be made to keep them as reasonable as possible.

Anyway, vote and/or email me with your comments.

New Greens on their way...

Nic has sent me an email to let me know that the first lot of unreleased Greens and Masters is on it way! Woo Hoo!

Important News regarding The Tekumel Project

We have decided to take over the manufacturing and selling of our range of 28mm miniatures that have to date been available through Eureka Miniatures, in Australia; through Fighting 15s in Great Britain and Europe; and via Eureka USA in North America.

The intent is to incorporate these ranges into the Tekumel Club. This will be done in reverse order, working backwards from the latest unreleased sculpts, back to our first releases. That is: the Ahoggya; the Hlaka; the Shen; the Makhis Gurek; the Gurek of the Clan of the Silver Worm; the Rulla Gurek; Defense Against Evil - then back to the Gureks of the Valiant of Ke'er; Turquoise Eye; Tleku Miriya I & II and for Tsolyanu: the Legions of Serqu and the Ever-Present Glory.

I do not as yet have a timetable for these releases, but the original releases - that of Serqu and Ever-Present Glory may be unavailable for some time. Therefore, if interested in these units, one must consider whther to wait of pick them up before the end of this year, when Eureka stops production.

Maintaining the high standards for production and shipping that Eureka has set will be difficult but we will endevour to emulate them as much as possible.

In addition to the above releases, we have a number of other things on the go: the Chamber of Sacrifice set, recently featured on our blog; the Puppet Master vignette; Princess Vrisa of Saa Allaqi; a Priest and Priestess of Hr'rsh; and the Legions of Lady Mrissa and Mirikitani, Hero of Victories. Plus others...

Please feel free to email me with questions or comments.

Howard Fielding The Tekumel Project green27@sympatico.ca
Posted by phf at 11:00 No comments:


This is another one of Federico's sculpts that almost by accident - rather than design - fits perfectly with the Chamber of Sacrifice project.

Per my last post there are planned to be eight(8) columns - three with the captives shown, three with those same figures with minimal clothing (torn, loincloths, or whatever) and a column without a captive. This left one of the eight columns unaccounted for, unless the "empty" column were used twice.

The single "empty" column is obviously the one that previously held the woman in the Sacrifice set. I had toyed with the idea of yet another captive, but then remembered that Federico had offered me this sculpt - perfect! She can be "in the queue" as it were, waiting to become...

Probably need a guard or two to stand over her...
Posted by phf at 19:29 No comments: 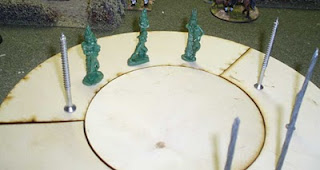 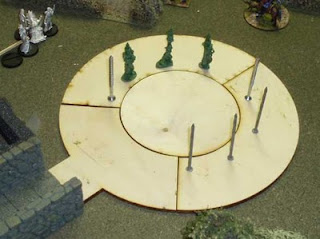 The Chamber of Sacrifice


I mentioned that the sacrifice vignette is going to be part of a larger set. I am working with Federico on producing a "Chamber of Sacrifice" set which will include resin scenery pieces. The above pictures show the floor templates I had laser cut by Litko Aerosystems.

The two greens of female captives chained to columns shown in the picture above are some sculpts that Federico did earlier and previewed on the Frothers site. I liked them and was inspired with an idea for a themed terrain piece. I emailed Federico and purchased the greens and asked him to do the male captive also shown above.

The screws standing in the pictures show where additional columns will be located. When the three captives have been mastered I will send them back to Federico to get versions with some scraps of clothing. I have also requested a column without any captive chained to it.

Having advanced thus far I began considering what else we could do. Perhaps a well or abyss in the central floor piece? Then I remembered the EPT art and requested Federico to sculpt that as a vignette. The concept being we can offer it separately or as part of the larger "Chamber of Sacrifice" set.

There are plans afoot for a general Temple of Sarku/Durritlamish release of companion figures: guards, priest/priestesses, acolytes, drummers, horn blowers, worshippers, etc. I am gathering ideas - so if you have any let me know.
Posted by phf at 11:13 2 comments: 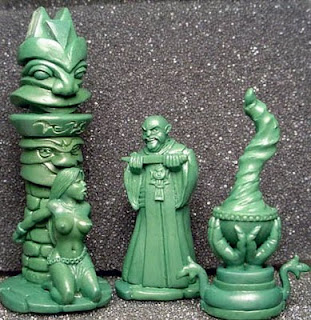 The Sacrifice, by Federico Genovese


Based upon art from the original Empire of the Petal Throne rules, and intended as part of a larger set.
Posted by phf at 18:23 6 comments:

A discussion on the Frothers forum prompted me to go out and find some indication about how Swamp Folk might walk. This is what I found:

From the works of Eadweard Muybridge. I have two books that collect some of his stop motion photography; one is for his human subjects, the other for animals.

There used to be a question as to whether all a horse's hooves really left the ground when it gallops. Muybridge was able to conclusively prove that they do. Previously it had been in dispute.
Posted by phf at 18:24 No comments:

I don't know why it is, but lately whenever I upload pictures I keep getting issues with them not loading properly. They end up with wierd, pixilated streaks across them as if the data didn't all upload. I don't know if this is some problem related to Blogger or my service provider or what but, in this latest instance, it is now fixed.

Please see my last post for non-streaky, non-pixelated WIP pics of the upcoming Swamp Folk. 26mm to the eyes. 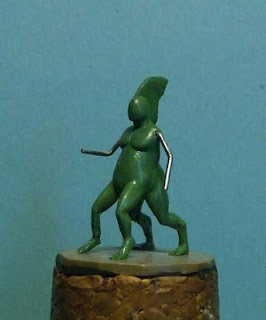 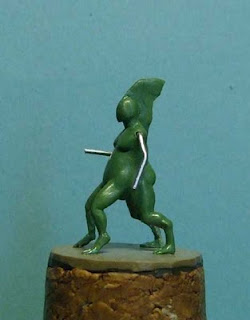 
Just a quick post to show off the latest stuff Ian Mountain is working on for us: Swamp Folk!

As the Swamp Folk have never been done in miniatures before, I hope you Tekumel fans will all be as excited as I am! :-)

These will , of course, be available through the Tekumel Club in due course....
Posted by phf at 06:26 No comments: