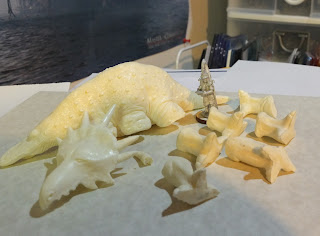 Great News! I just found the Chlén Beast master model I was originally sent so long by Chirine. I just have to do a minor repair to one of its horns and then I can send it off to Jeff at JTFM for molding and casting.

IIRC, the cost per casting was estimated at $13-14, not including the mold costs. Our prices will be fair but have to take that into account. Now, that was a couple of years ago - material prices may have changed but Jeff may also have refined his methods. Part of the cost comes just from the size of the thing, but the multiple parts also bring it up.

It may be he can do a single piece casting. I mean he does things like casting the interiors of the crew compartments of his WW2 German half-tracks, and stuff like micro-thin handrails on tanks which are cast on the tank, and not as separate pieces! So a single-piece casting might be "old hat" to him.

The next thing to do will be getting wagons and crews/loads to go with the beasties. Probably - thinking out loud now - what we need to do is get a couple done and then get some kind of a harness sculpted on and then make production molds of that....

Suggestions and Comments welcome, as always!