Resin on their way...

Our resin beasties were going in the post this week, so I am reliably informed, now that the Posties are back. Unfortunately, it's a holiday tomorrow so that may slow things down. And then I am away at Historicon from Wednesday next week, so it will probably be the week after before everything gets sorted out.
Posted by phf at 16:49 No comments:

The government has tabled legislation to force the Post Office union back to work. It's a bit draconian as the legislation will apparently force them to accept less than Canada Post was offering (their strike was about other issues, including safety.)

OTOH, it will allow us to sell our product, so that is a good thing for us anyway. Especially as I have sculptor's invoices waiting to be paid!

In the meantime I have actually started painting again after a lapse of close to two years. If I can take some decent pictures I intend to chronicle my progress on my Heroes of the Age blog - it's meant to be my "gaming in Tekumel" blog, after all. The finished product will end up on our Tekumel Club pages. Right now I'm researching traditional Indian fabric patterns.
Posted by phf at 11:28 No comments:

Looks like the government is going to legislate the postal workers back to work. Ordinarily I wouldn't object to the strike, but now that I have a mail order business it is just a bit "inconvenient." 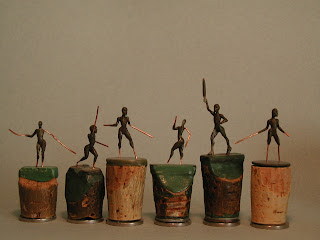 Canada Post has locked out it's striking Union workers, so we are shut down for a bit - unless anyone wants to use a courier service(?)

Hlutrgu Foot -
Warband of 4 command figures plus 10 rank-and-file;
Horde of 10 troopers; and
Flotilla of one large coracle, one small coracle plus 9 crew figures.

The Sacrifice -
High Priest of Durritlamish, female sacrifice chained to pillar, chalice, prone slave girl. Based upon art by MAR Barker from the original Empire of the Petal Throne game.

Prisoner Columns -
2 female and 1 male prisoner each chained to a column. Intended to be part of a larger set.

Princess Vrisa - Daughter of the Sao of Saa Allaqi - a character from Professor Barker's own campaign. Our first "Unlimited Release Figure". Unlimited release in that we won't stop selling her, unlike all those LE figures out there! ;-)

The original ranges from Eureka can still be ordered as Special Orders as I will have to get Eureka to cast them. They can be viewed in PDFs in the right-hand column.

The resin Biridlhu and Thunru'u are in production but not yet received. Should be this month though.

Now where is the damn camera! Last time I remember seeing it was at my Niece's wedding, a week-and-a-half ago...
Posted by phf at 21:17 2 comments:

The Biridlú (aka the Mantle) 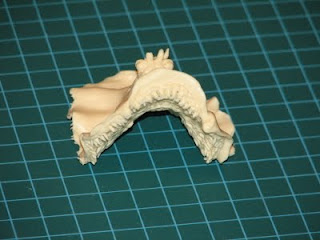 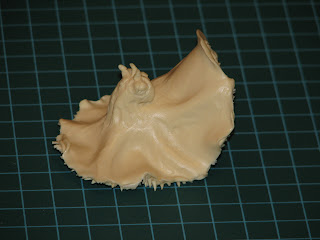 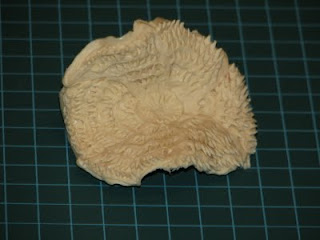 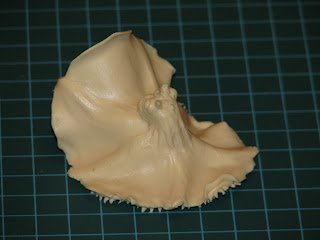 Sculpted by Carolyn Bussey, Resin Casting by JTFM
Jeff Trnka sent me these pictures of the first resin casting of Carolyn's beastie. Turned out rather nice I reckon. Carolyn did a really good job on the teeth and Jeff has managed to cast them nicely. I didn't have any worries really as his stuff is always super-detailed. It's quite amazing the grab handles and rails and other small details he somehow manages to cast on his 1/56th scale WW2 tanks.

What is it, you ask? It's a Biridlú, also called the Mantle. There are similar things in D&D and other games - I think in D&D it is called the Darkmantle. At least I have a D&D plastic miniature by that name. Only the D&D miniature is tiny. These creatures are supposed to fall/float down from above and engulf the party or at least one person. My D&D miniature couldn't engulf a Hobbit! Carolyn's model is larger and looks like it could engulf and smother a full grown man.

My understanding is these were being cast up so it won't be long until we have them available.
Posted by phf at 10:58 1 comment:

I've updated the Tekumel Club Blog (link at right) with the new stuff coming - should be here next week.

And Jeff sent me picks of the Biridlu - more on that tomorrow!
Posted by phf at 19:01 No comments:

So what the heck is wrong with Blogger, anyway?

I notice that my "friends" listing has disappeared and I read a blog just now where a similar thing was happening there.

I have so much trouble posting comments on some blogs - from Blogger acting up - that sometimes I don't bother. And there seem to be a lot of error messages when I post or navigate between blogs - can't find this or that, and so on.

So, is Blogger just generating too much traffic - or what?
Posted by phf at 18:26 No comments:

And I've ordered 50 sets each of the Sacrifice set, the Puppet Master vignette and Princess Vrisa, along with 30 of each of the column prisoners. Probably have them, via courier, by the end of the month, if not sooner.
Posted by phf at 11:02 No comments: