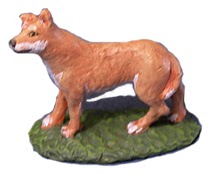 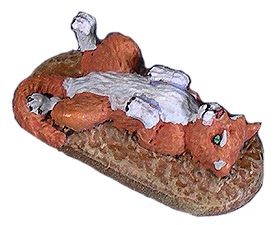 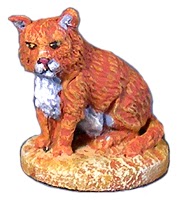 The Tiúni (cat): Not a common pet in the south (it can’t cope with the local equivalent of the mouse), but found in cooler northern regions, where vermin don’t pack quite the same armament.

With Mega Miniatures closing down I have taken the opportunity to pick up some moulds that I think will "fit" in with our ranges. The first batch of moulds arrived the other day and will be in production by the Fall. These first moulds are animals: two poses of cats (sitting and reclining on it's back), a Dingo, two birds: a Flamingo and a Pelican. I chose the Dingo because I wanted a sort of generic dog rather than choose a single identifiable breed. So by the above description, not one of the "hunting breeds", but IMO a good example of "man's best friend" regardless. The flamingos and pelicans are just meant to be generic scenery items to dress up the table with.
Posted by phf at 13:05 1 comment:

I've been bedeviled by codes of late. Figure manufacturing involves a lot of bits - the various parts of the figures and then the moulds themselves, it all adds up to a lot of things to account for. You can't use words to describe what you need. Saying I want 10 x the Medium Tsolyani Standard Plume or 30 x the spikey sword  just doesn't cut it. (Which mould was that spikey sword on? And which spikey sword do you mean, anyway?!)

So I have been giving all the figures and parts codes and names. When I started I didn't think far enough ahead, so the Hlaka - our first release with RAFM doing the casting - start at number 1, and I progressed from there. Later I tried to apply some logical order to the numbering: Tsolyani military - 1000s, Yan Kor - 2000s, and similar. But then there arose the problem that we typically sell our figures in "Sets", and how did the sets fit into the coding scheme?

As we stand poised to bring all are older figures back "on line" this problem is becoming more acute. I've finally worked out how to do it. As RAFM doesn't need to worry about the sets - I make up the packs myself - I can keep the figure codes separate from the set codes. So now I have a series of codes describing what part of the catalogue the set is from:

PP = Palace of the Priesthoods;
PR = Palace of the Realm;
PF = Palace of Foreign Persons;
AE = Armies and Enemies of the Petal Throne (ie. Palace of Ever-Glorious War) This code will be followed by "-TS" or "-YK", etc to show which nation the unit belongs to;
HA = Heroes of the Age;
IR = Inimical Races;
UW = Underworld;
FF = Flora and Fauna.

I was working on the list for the Yan Koryani Gureks yesterday. Initially I just ordered it by what we had, but later realized that I should allow for future additions. I decided to follow the order they are given in the Yan Koryani army book. The codes now account for each Gurek and all the various troops types, including artillery and sappers. There are over 200 codes! :-0!

Here is an example:


These are some of our existing figures. They are not available yet, but we are getting closer to re-releasing them. The moulds are now "in country" and I hope to start getting figures cast in the Fall. Some figures such as the Kerdu and the sappers or artillery crews still need to be sculpted. That is 22 codes for only three units!