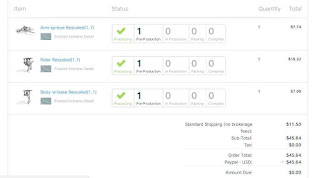 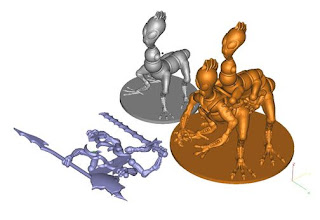 A belated follow-up to my last post, wherein I was attempting to obtain some transparent miniatures via Shapeways. As it turned out, once they had analysed the files vs the material requested, Shapeways declined to do the job because the designs didn't meet the minimum parameters in a number of spots. Basically they were too fine a models - too fragile - to survive the cleaning part of the printing (which I gather involves a water jet.) So that is where it has been sitting for the last while.

Then a friend of mine from Down Under, with more knowledge of these things than myself, suggested trying the "Frosted Detail" options. So today I went back and looked at the materials analysis again and guess what? Using that material the designs pass muster and can be printed.

So I placed the order as shown above. I opted for the "Frosted Extreme Detail" which is the most expensive of the two. Note that the single arm sprue will do for both the foot and cavalry figures I have ordered: one arm sprue per two Hokún.

Not cheap. Evil Empire sort of prices. And this is *cost*...not accounting for Royalties, etc.

Still it might be of interest to some. Depending upon how they turn out. I am now wondering if the body cavity will be hollow or not. If so, could one do a "ship-in-a-bottle" sort of thing to insert the innards? How cool would that be?!