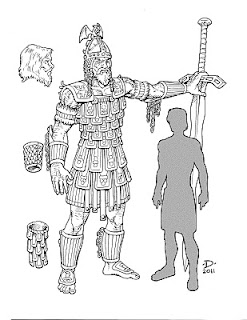 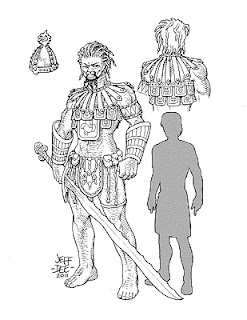 I knew that they were tall but I never realized just how tall until Jeff drew these pictures with the comparison silhouette. 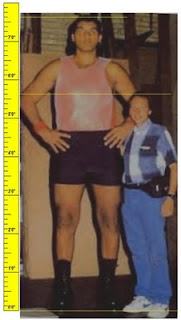 Here is a Real World "N'luss": Jorge Gonzalez, a professional wrestler until he passed away last year.

In battle they would have large oval shields which they bear as protection from enemy missiles. These they discard before combat - a piece of the fluff that has always bothered me because I felt the shields would get underfoot. Now, having seen the size of their two-handed swords in proportion to a regular Tsolyani, I can see that this wouldn't be the case. They would need a substantial interval to either side in order to wield their weapons so there would be ample room to discard their shields and not impede the advance of their fellows following on behind.
Posted by phf at 18:22