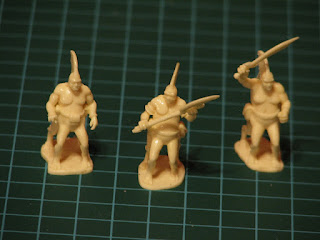 Jeff has sent me some test castings of our up-coming Swamp Folk and Tinalíya figures! Yay!

Here are the Tinalíya, sculpted by Faron Betchley. The arms are being cast separately in metal so as to be more easily pose-able.  The limbs of the Tinalíya are like little globes making them essentially miniature alien Michelin Men. With metal arms they player will be able to bend them to suit... 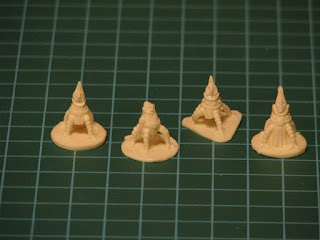 The Swamp Folk consist of two armed marines and a civilian. The intent is to get some more variants done: an armoured chieftain, some more marines with boat hooks and axes and perhaps a civilian with a staff. 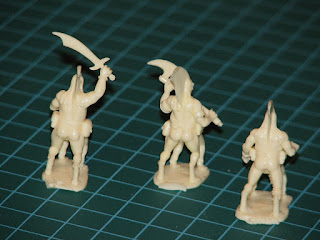 
I also have an idea to do some semi-submerged for amphibious operations...

Resin castings by Jeff Trnka of JTFM. The Tinalíya arms will be cast by RAFM.

Update: Jeff has just reminded me axe wielding figure is in two pieces - the weapon and arms are a separate piece from the body.