The Temple of Sárku, Lord of Worms 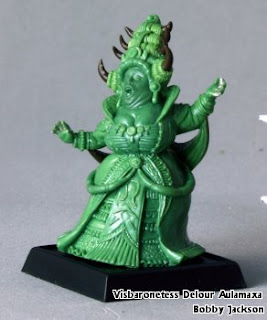 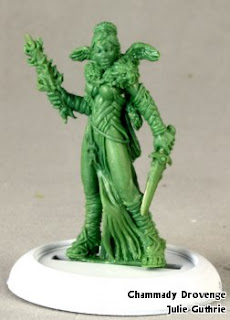 I have had occasion to think about the temple of Sárku the last few days, and of his cohort, Durritlámish. Coincidentally I came across the Reaper figures shown above in the friendly local brick-and-mortar and, always on the look-out for Proxy figures, I snapped them up.

Both will, IMO, make fine Priestesses for either of the two temples in question. The Visbaronetess is exceptional, not only for stepping out of the norm for female fantasy figures, but for the character the figure exudes. Her hair style looks like it belongs to the Worm Cult!

I see her being pure evil, like Cruella DeVille.

The Chammady figure has some sort of stole with wings wrapped around her shoulders - not sure quite what it is supposed to be as it seems to have a cat-like head. I'll be cutting the wings off - unless somebody can enlighten me as to what they are meant to be.

But never mind that, the main reason she would make such a great Priestess is that the dagger she is holding in her right hand looks to me very much like one of Sárku's ceremonial daggers! (Can't remember the proper name...)

Excellent figures both. The Visbaronetess matches our figures height-wise, if not in girth, and Chammady also matches pretty good - slightly tall, but not overly so, IMO.
Posted by phf at 19:00